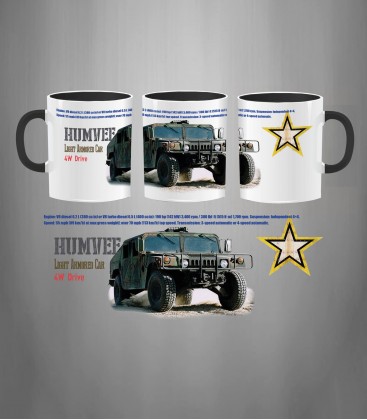 U.S. Army Humvee Mug:  9 cm (h) 8 cm (diameter) 330 ml or 11,15 oz. Microwave and dishwasher safe. Made from white ceramic. A must for Army fans.  This mug is the perfect way to start any tough day ! An essential gift for Humvee car lovers.

This mug is printed with the U.S. Army Humvee design. AM General was awarded an initial contract in 1983 for 2,334 vehicles, the first batch of a five-year contract that would see 55,000 vehicles delivered to the U.S. military, including 39,000 for the Army; 72,000 vehicles had been delivered to U.S. and foreign customers by the 1991 Gulf War. HMMWVs first saw combat in Operation Just Cause, the U.S. invasion of Panama in 1989.

The HMMWV was designed primarily for personnel and light cargo transport behind front lines, not as a front line fighting vehicle. Like the previous jeep, the basic HMMWV has no armor or protection against chemical, biological, radiological or nuclear threats. Nevertheless, losses were relatively low in conventional operations, such as the Gulf War.

1 other product in the same category: 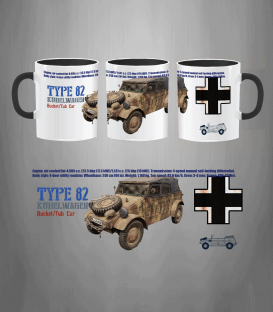